Welcome to this review article of modern handheld and stand illuminated magnifiers, in association with Optelec UK.

Following on from the ‘Supporting Visually Impaired Patients Optometry Practice’ article, I thought it would be really useful to explore the hand held and stand magnifiers available in a little bit more detail, to aid the best selection of devices in practice. This will hopefully be useful for optometrists, dispensing opticians and orthoptists who are involved in Low Vision work.

In the time I have been doing Low Vision clinics, hand held illuminated and stand illuminated were by far the most commonly dispensed devices. Over this time not much had changed in the design and usability of these devices. This article aims to provide an update on the type of magnifiers available today with some of the technological advancements in this area.

In my last Low Vision article the role of modern electronic devices, which have evolved incredibly over the past decade was highlighted. Despite the increasing usability and lowering cost of electronic devices, I don’t think we will ever the see the more humble conventional illuminated magnifier become extinct. Magnifiers are generally more affordable, are often very portable and tend to be quicker to turn on and operate, so will they always have a role in the patients’ armoury of equipment.

General considerations for choice of magnifier

There are a number of elements to consider when weighing up what type of magnifier is going to work best for your patient. The patient may have other physical impairments that might preclude certain types of device, for example significant hand tremor or poor dexterity in one hand might make a stand magnifier more suitable than a hand-held.

You also want to consider the task for which the patient is using the lens. It may be for spotting labels or dials in the kitchen rather than reading, in which case a handheld would be more appropriate. Some crafts might demand a device that is hands-free such as a ‘chest-magnifier’ or a lens clipped onto their spectacles. It is very much a case of assessing the needs of the patients and recognising the limitations of certain devices in certain situations.

The level of vision and nature of visual impairment will have a strong bearing on what is realistically achievable with a magnifier. Chatting the patient and keeping their expectations on a realistic footing is really important to avoid the patient becoming frustrated. Often with reading with a magnifier it is the case that the patient will manage short reading tasks, however reading long passages of print, particularly with a strong lens takes a lot of concentration and is tiring. The lower the level of vision, the stronger the lens required typically. This brings with it a reduction in size of lens, compounding the challenge of reading.

How to calculate power of magnification required

This simple equation gives a good starting point in terms of the magnitude of magnification to try with a patient. Often the strategy is to start with a lens at this given magnification and try one or two different strengths around this power to subjectively test best reading performance. It sometimes takes more magnification than calculated due to other factors such as reduced contrast sensitivity. The normal aim is to use the lowest amount of magnification that allows the patient to carry out the task, bearing in mind that each increase brings about a reduction in field of view. If this is reduced too much the patient can’t see the ‘shape’ of the word, which can often help in print recognition.

The equation is this:

For example a patient capable of reading N15, who wants to read N5, would require a X3 magnification lens.

This group of magnifier is probably the most commonly used. They are generally fairly easy to use and most lenses are fairly portable so are suited to a lot of different tasks around the house or out at shops and in cafes etc.

They come in a wide range of powers, in both illuminated and non-illuminated forms. Normally an illuminated device is preferable to increase the contrast of print being viewed. A lot of patients may have reduced contrast sensitivity due to cataract and/or macular degeneration so this is important.

The range of powers can be anywhere from about X2 to about X13. The field of view again is an important consideration as the power increases.

The design of handheld illuminated magnifiers has improved significantly in the past few years in a number of ways.

The shape of the handle in some ranges has become much more ergonomically designed, so that the user is holding the lens over the reading material in a much more comfortable and natural position.

The improved lighting has perhaps been the biggest improvement. Most devices now have moved away from tungsten bulbs to more effective and efficient LEDs. LEDs are preferable as they emit light which mimics that of daylight, with a much more uniform level of illumination over the reading material than tungsten. Batteries also last much longer with LEDs, making life easier for the patient. Some of the latest models have an adjustable LED light so that the brightness and colour of light can be altered to whatever works best for the patient.

Finally in a further innovation using similar recharging technology to mobile phones, some devices can be charged off a wireless charging pad. This improves the usability as the pad can be placed near the area where the magnifier is most commonly used and the device rarely runs out of battery as it is always charging between tasks.

Stand magnifiers have a really important role, particularly for patients who maybe struggle to hold a hand-held lens at the optimal distance. They may have a degree of tremor or reduced use of a hand due to stroke for example. Stand magnifiers take away the need to judge the best focal distance by the lens being housed in the device at that distance. The patient holds the magnifier flat against the reading material.

The range of lenses in this case is pretty large, again from around 2X to 15X. Most of these devices are best in illuminated form as they tend to cast a shadow on the print, particularly at the stronger end of the scale when field of view is becoming constricted.

The patient needs clear instruction and training on how to use these devices, and generally the best is gained from them when the reading material and lens is held as close to the eye as possible to maximise the field of view. As with any of these devices it is important to chat to the patient about what they would like to use the device for, where they would be sitting and try to figure out the best way practically for the patient to go about this.

The initial choice of power is calculated as above and then it’s a case of subjectively trying some of the devices to see what works best for them.

As with handheld devices, these have improved in recent years, mainly due to similar advancements in the use of LED lighting and also in more ergonomic designs.

In a lot of cases it may be that having both a handheld and a stand magnifier might be useful for the patient as the two devices might serve different roles for the patient. For example to sit and read a letter, using the stand magnifier with a clip-board might work best, while doing tasks in the kitchen, the more portable handheld kit might be more usable.

Selecting and dispensing magnifiers for patients with visual impairment will depend very much on the individual case, and is not always a hard and fast science. Key pieces of information are gleaned by chatting to the patient about their needs and what they want to be able to do in terms of reading or any other near tasks they. Their level of visual function obviously goes a long way in determining the type of device that will be suitable, along with any other physical constraints or problems them patient may have.

The skill of the practitioner is then to take all of these factors into account, select a device as a starting point, and then to clearly talk the patient through how to use it best. You must then be prepared to try a variety of different devices depending on how they have managed with the initial choice of lens, and take the clues from that in terms of how you might be able to improve.

Patients can easily get frustrated during this process so it is really important for the optometrist to have very positive communication with the patient. It’s a combination of encouragement and keeping their expectations at a realistic level. Giving clear instructions on how to use the device is vital and try to make sure that they have understood everything before they leave. Having a relative with them in this respect can be really helpful. Follow up for these patients is important so that you can identify how they have managed with their magnifier and whether they should consider an alternative piece of equipment or additional pieces for other specific tasks.

Handheld and stand magnifiers are a vital part of the kit available to visually impaired patients, even amongst all of the exciting new electronic equipment that has developed over recent years. The quality and usability of these has really improved through better quality and more efficient lighting with LEDs and more ergonomic design. Optometrists are well placed to help test these devices with patients and dispense them, so that they get the most out of them.

My thanks again to Optelec Uk for supporting this article. To have a look at their website or to view their catalogue for eye-care professionals follow the links below. 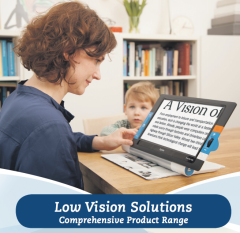 One thought on “Handheld and Stand Magnifiers – Modern Devices & Their Role”

Any cookies that may not be particularly necessary for the website to function and is used specifically to collect user personal data via analytics, ads, other embedded contents are termed as non-necessary cookies. It is mandatory to procure user consent prior to running these cookies on your website.